What am I reviewing today? That's right...another Dee Henderson book! I hope you all aren't getting bored with this, because we've a ways to go yet. Thankfully I, for one, am still loving reading these books. :) Today I am reviewing True Honor, the third (and possibly final) book in Dee Henderson's Uncommon Heroes series. I say "possibly final" because there is a book 4, or was, but it was later removed from the series and renamed.

So what is True Honor all about?

Darcy St. James retired from the CIA two years ago with an Intelligence Star for Valor. The cold war was over; she'd won her war. Then September 11 happened. Friends died. And her nation needed her network of contacts and her street smarts back. Darcy is hunting down a man who knew September 11 would happen--and chose to profit from the knowledge.

Chief Petty officer Sam "Cougar" Houston is busy: the intelligence Darcy is generating has his SEAL team deploying around the world. As one of the squad's snipers, he's taking on the enemy one man at a time. And he can't afford to take Darcy's contacts at face value--one of them wants her dead. 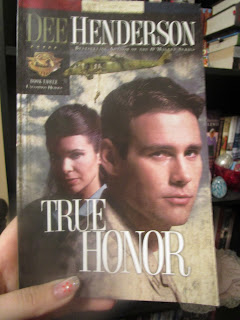 First impressions? I loved this book. I do believe it may be my favorite (if one can choose a favorite) of the Uncommon Heroes series.

As with every Dee Henderson book I have read, her characters are vivid and engaging. The plot in this book was more suspenseful than the last two, which may be why I've decided it's my favorite. Romance only does so much for me. :P

The faith of Darcy and Sam is expertly weaved throughout the story, like any other Henderson novel, and I love it. It's very real. It doesn't feel forced and pushed onto the story; it's organic, like any other relationship in the book. Dee Henderson's ability to portray faith in her stories is something I envy and aspire to have.

I have reached a new height in my Dee Henderson novel reading experience. I have something to complain about! Throughout the series you only spend time with people essential to the plot. The only reason people move into the main characters lives is because of plot. To be fair, this is rather true of any story. However, in this particular series is is noticeable and annoying for several reasons which I will attempt to explain. (some possible spoilers ahead...)

First of all, best friends change. In book 2, True Valor, Tom "Wolf" Yates and Bruce "Striker" Stanton are very much best friends. By the end of the book they are contemplating having a double wedding with their respective girlfriends. In book 3, True Honor, Bruce never makes an appearance (because the plot never calls for a parajumper) and Tom's best friend has become Sam Houston, one of the main characters...because...plot.

As for the double wedding, it's never outright agreed upon, but the last lines of book 2 are a conversation between Bruce and Gracie discussing having that double wedding so it is implied to the reader that it is going to take place. The opening of book 3 is Tom's wedding. First of all, it isn't a double wedding, but I could easily get over that. Secondly, Tom's best man is Sam...not Bruce, the one man the reader knows to be his best friend, but Sam, a person whose name we know but nothing else and he's acting like he's always been Tom's best friend. I found that remarkably inconsistent and it bothered me.

The second thing that bothered me was that Grace never made an appearance. I would have been happy even if we didn't see her but at least heard her mentioned...even just once. Joe and Kelly from book 1 are in True Honor several times, but never Gracie. Tom and Gracie are cousins, but their relationship is very close in book 2; they are more like brother and sister. A very close brother and sister. We don't even hear mention of Gracie at Tom's wedding. Later in book 3, Tom and his SEAL team are able to get a message to home during one of their deployments. Tom sends a message to Jill, his wife, but nothing for Gracie. Jill's bother, for the record, is Bruce (who at this point should be married to Gracie). It wasn't a huge deal, but it was just one more moment where characters who weren't essential to the plot were left out. It happened often enough that I noticed it, and that isn't a good thing to notice about a story.

But, on the bright side, the story as a whole was amazing! :)

There is also a note from Dee Henderson at the end of this book explaining that during the writing of True Honor, September 11 took place. Since that event is an integral part of this book, I can imagine a lot of rewriting took place. And more than that, this must have been an incredibly emotional book to write during 2001. My respect for Dee Henderson increased quite a bit while reading her note at the end of True Honor. I don't think I would have completed this book had I been the one writing it, or if I had, I would have come back to it years later and not persevered right then.

Would I read it again? Absolutely.

Would I recommend this book to others? 100% YES. Like I said previously, this is my favorite of the Uncommon Heroes series.