So what is this story all about?

Someone snatched his cousin's wife and son. FBI agent Luke Falcon is searching for a kidnapper and sorting out the crime. He's afraid it is the work of a stalker. He's afraid they're already dead. And he'll do anything required to get them back alive...he didn't plan on falling in love with the only witness. 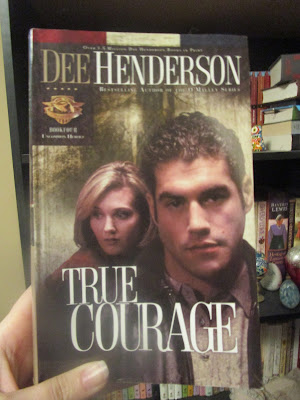 First Impressions? This book was a lot slower to get into. To be fair, with any average novel I wouldn't have thought anything of it, but the fact it took two chapters for me to be hooked to a Dee Henderson novel struck me as odd. She usually catches me on page 1. However, once I was hooked, she delivered the same spell-binding, suspenseful, amazing storytelling she always does.

I know I say this with every Dee Henderson novel, but her characters are practically flawless. Not that the characters don't have faults but that they are written so well.

Her ability to string the reader along on an intense mystery of uncovering the truth before someone gets hurt is awe-inspiring.

I'm basically just a fangirl of Dee Henderson at this point. Expect zero intellectual or analytical breakdown of this book or any other of hers. I'm just here to rave about how awesome she is!

Because it took me two chapters or so to really get hooked on this story, I had half written a start to this review where I talked about how this is my least favorite Dee Henderson book and I was even bored by it....and then I got past the beginning and realized it could easily be a favorite Dee Henderson novel of mine. She's just that good. I don't think she's physically capable of writing a bad novel.

I will say, faith took a bit of a backseat in this one. Not that it wasn't there, because it definitely was. The two main characters have a very solid relationship with Jesus and that was definitely showcased. Usually in Dee Henderson novels the main character is struggling with a specific aspect of faith that they then deal with/learn through the tale. That wasn't the case in this specific story which is why I say it took a backseat. It was still very present, it just wasn't a plot point.

Would I read it again? Absolutely.

Would I recommend this book to others? 100% YES.