During the last month, I have been on a new adventure!

A friend of mine gave me a bonsai tree starter kit for my birthday last fall and I've finally pulled it out and begun growing my own bonsai! I have never done this before, so every step has been new and exciting and a little bit scary (in the sense that I really want this to work and am scared I don't have a green thumb). My little instruction manual is quite specific, and of course, I followed every single step to the letter of the law. 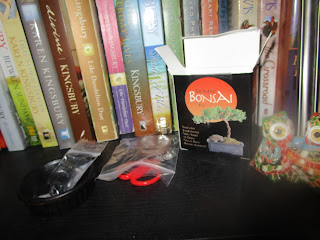 The process started by soaking the seeds for 24 hours (shown above...the five seeds are in the Ziplock filled with water). After that, the seeds were placed in a damp paper towel and put into the fridge for a week. And then finally I was allowed to plant them! 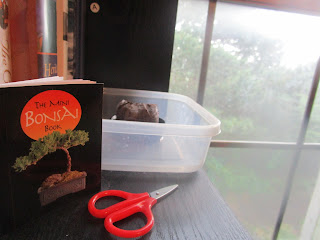 Above is my planted seeds patiently waiting for the rain outside to stop so they can get some much-needed sunshine. :) 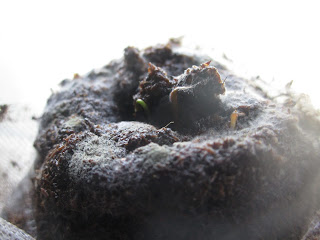 After one week I had a whole bunch of moss and nothing else, but after two weeks I finally had the little green shoots I'd been waiting for! 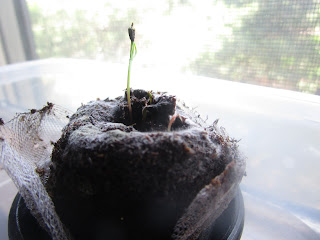 A few days later, it became excessively clear which plant I was going to keep and which to remove (you only need 1 bonsai, but you plant extra seeds to make sure you get at least 1. I ended up with 4 growing shoots from my 5 seeds. But only 1, as you can see from the above picture, actually wanted to be a bonsai tree. I'm pretty sure the others saw their brother growing so quickly and then immediately gave up and quit growing at all.) 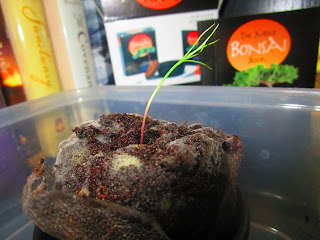 That's what my bonsai tree looks like so far. I'm not sure how much longer it'll have to grow before I get into the detailed discipline that is trimming a bonsai tree. I'm excited though! I love exploring new things, and this one has been especially fun to do! :)

I also vlogged the whole experience, if you want to see me planting, watering, murdering young shoots that didn't make the cut, and all that: My Bonsai Vlog